This is our second year of having blue tits using our Nestbox with a camera in it. Last year at this time we were very excited as May 1st 2007 saw the first egg laid in our Nestbox. The photo below was taken at 7.20am then and I suspect that the egg hidden below this female was laid about two hours before.

So what’s going on with the same Nestbox this year? Well, I have to say that I really didn’t expect an egg today. We have a nest being built by a blue tit female at the moment but she is making such hard work of her creation. I’m really not sure when we can expect her first egg. I have been looking through photo captures from last year and the montage below gives an idea of how far behind our Nestbox is this year. 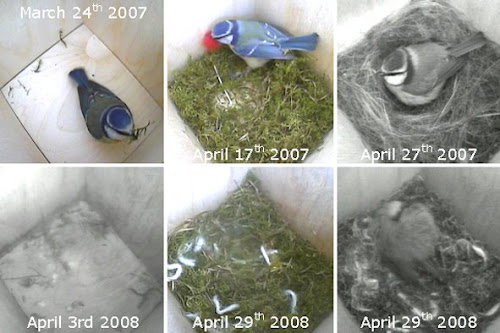 Moss came in last year on March 24th and the photo above shows that two days later our 2007 female was seen taking it out again. Last April was unusually warm and dry where this year it has been a lot colder with lots of hail stones. It has probably had the usual amount of rain.

So has the colder weather held nesting birds up? I am guessing that it may well have. You can see that our 2008 female brought the first moss in 10 days later. However, I cannot believe that our Nestbox will remain a full 10 days behind last year. The last two photos show the 2007 female in the nest cup and the 2008 female sitting on the surface as she still has to decide where to make her nest cup. This is what the shuffling is all about – pushing the material out to make the cup.

My instincts tell me that we will not be waiting until May 10th for an egg to be laid. I am going to make an estimate that she will not be having a holiday on Monday 5th May and will lay her first egg then. Oops… I’ve said it now!

Okay, it’s finally video time and I’ve a few to share. I have been waiting to capture some interesting footage seeing as not much has appeared to change in our Nestbox. I was hoping to catch the male visiting to reward the female with a tasty bite but alas I missed him. I have chosen to show footage from the same day, April 28, so that you can see how it changes!

Early morning shows the picture is in black and white. She looks like there is just no time to wait! See how thick and bouncy the nest is making her shuffles tricky…

Afternoon and let the shuffling continue… you can see the layer is not as thick now and floor can be seen again! I wonder if that was the male at the entrance? I have a feeling that it was someone else…

Afternoon break and time for a little inspection before… taking more moss out! Mm… did the nest not look thicker again?

Inspection complete and its time to get back to work again… this moss just has to go!!! Sorry about the quality of this footage. She is taking too much, too quickly towards the camera and it can’t keep up. However, it does show very clearly how quickly the nest can empty…

I’m busy… please go away! Okay, this capture is a bit different. If you turn up the volume in your speakers you will hear how agitated the blue tit is. Although looking at the video you will see how she spreads her wings out too. I am guessing she has an intruder at the entrance. I should have looked out another window to see who it was but I do have my suspicions. I saw this behaviour last year while the female sat on her chicks in the nest cup. Two starlings were at the entrance then too. I guess they were fancying her chicks for supper…

Night, night… I’m all tired out now! You will notice she is in the corner to sleep. This is usual until there is a nest cup. This footage was taken just after 8.30pm. You can see even when going to sleep she has to move moss around. Notice how she is all fluffed up and tucks her head in to make a ball…

I cannot believe all blue tits make nests in this way from looking at video footage and photos in other websites. Therefore, through looking again at video footage from last year I am now wondering if we have the same female in our Nestbox this year again. I am in no doubt we have a different male as this year as this one has a distinctive curl marking. I would then forgive her for all her indecisions with this nest and have my fingers crossed for her to have a successful brood this year.

Finally, as I began this post I had a look in the Nestbox tonight and was delighted to see the female looking like she was sitting in the nest rather on top of it. This would suggest that this evening she has been working on a nest cup. Mm… I have to say that she did this a few nights ago and then in the morning wrecked it all. I do think she is getting closer though. The photos were taken from left to right but it does look like she may be heading towards the wall again and on top of the nest again. Ah…

All photos above were taken from the camera nestbox in my garden.