Yesterday afternoon I spent an unexpected couple of hours at the Royal Botanical Garden, Edinburgh. I had the opportunity of a lift through and took it. My thoughts were that I could get garden images for this time of year – simple snapshots of this garden. However, I really didn’t expect the shots I did get.

Snow was trying to fall but quickly turned to rain as I entered the garden. My camera stayed in my bag. I walked in the East Gate and headed towards the glasshouses. My how different the pond looked as I passed by without its lush planting – the Gunneras were piled with their own leaves for winter protection just as I did with my one.

Groups of mallard ducks were moving about on the water. As I walked around the grass edge, my feet squelching in the wet grass, I looked towards another border. The crows caught my eye foraging – I then thought of George and the wildlife that will be in the winter mulches. I walked on.

Grey squirrels are seen throughout in this garden and it wasn’t long before I spotted them up in the trees. I was still raining – I’d get photos later. I waked on noticing how beautiful all the tree bark was. Mmm I could take a few photos perhaps.

The rain stopped. My camera came out and I took a photo. I walked out from under the tree and the rain started again. Okay, it was time to head to the tearoom for a coffee. Gosh I didn’t realise how cold I’d got until I felt the warmth of the tearoom. I sat by the window looking out on the garden. The rain stopped, the sun ‘tried’ to come out so out I went again. I headed towards the top end of Chinese garden – I love this area. This botanical garden has lots of open areas with large trees but I love the contrast here where you enter dense plantings of smaller trees and tall shrubs along a narrow enclosed path.

In a very, very small way I adopt this in my garden. I have the open areas of the lawn then the paths that draw you in with planting on either side. I feel this contrast works well in any garden whatever size it is. The garden was quiet as you can see – but if you look closely you will see that the bench was occupied! Down the hill and towards the bench I walked and the robin didn’t move very far at all. A couple of unhurried jumps took him to the branches of some shrubs. Now I have to say here that I do like to use my tripod for close-up shots as I don’t manage to hold the camera as steady as I should! The robin began preening itself. It wasn’t bothered by my presence at all.

I moved closer. I moved even closer. I began talking photos and it still didn’t move – the photo above was the best of my attempts but I didn’t want to miss this robin out. As I walked on down this winding zig-zig path the robin watched me from his branch. Noisy rushing water caught my attention next. There is a stream that goes from the top level down to the pagoda at the bottom. The paths lead to and away from it as they zig-zag to the bottom and amongst the planting you don’t actually hear it.

Then, as you step out of the shrubs on to the small bridges you suddenly hear it – this too is quite a contrast. I love to see streams with rocky edges and at this time of year with fewer plants at the edges. It was a delight to see the structural shapes for a change. The red bridge above overlooked the pool at the bottom and as I headed towards it along the narrow paths and away from the stream it was very quiet again. Then I heard an unusual noise and as I approached the bridge I saw a woman taking photos from the bridge.

I looked down to see a large, not the prettiest looking, bird on the faraway edge. Although I took a couple of photos too I decided to walk down in to the pagoda itself and get shots from there. A grey heron sat still on a rock with the wind blowing its feathers about a bit. A man with some serious camera equipment was in the pagoda. I took my shots and spoke to him for a moment and he told me the noise was a pump that occasionally made a noise and that he had just seen a kingfisher at the far end of the pool. 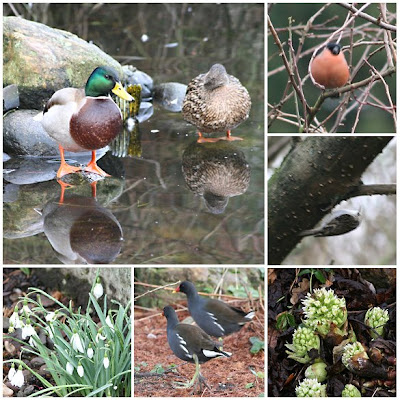 A Mallard pair had also been at the waters edge but it was the garden birds that really caught my attention next. As I almost left my path with the open grass area seen ahead my attention was next drawn to blue tits, great tits, and coal tits jumping about the branches at my eye level.

Then I heard a bird noise that I wasn’t familiar at all with and I looked up and to my delight saw four stunning male bullfinches. They were quick to leave but I stayed where I was just in case they came back.

Movement on another tree then caught my attention. This area was dark, the bird was very quick and I wasn’t quick enough to change setting on my camera but I did get an outline of this bird. I thought it was a nuthatch by its shape but looking at my books it was a tree creeper I’d seen. Garden birds that I have never seen – this was great!

If you don’t see many garden birds a trip to a botanical garden or park now when there are no leaves on the trees is an excellent time to see them. I must have a return visit here. I came to see the layout of the garden in winter and it was the birds that really made this trip special.

Time was not on my side now – I was soon to get picked up again. I did see some plants in flower. Snowdrops were seen in pockets and new plant growth was emerging through the winter mulches. I also spotted a pair of moorhens but they really didn’t stay still enough for still photos even with a tripod. Gosh what out of scale and ugly feet such a pretty bird has! Great tits and coal tits had been very happy to almost pose for some shots in the Chinese Garden but it was time for me to leave so I snapped, snapped , snapped. Gosh that great tit looked stunning – he almost knew it himself! A brisk walk took me back to where I started except I hadn’t noticed the flowering witchazel on the other side of the path. As I stood taking photos I got quite a fright. There was a woman blowing a whistle walking behind me. I continued taking photos and as she walked into the garden she shouted something. I heard the end part saying the garden was closing! Never, during all the times that I have visited this garden did I know they did that!

A few steps and I was at the gate. I noticed the main part was closed and people were getting their photos taken from the other side in front of the beautifully sculptured metal gate. I, of course, took a quick photo myself before heading out for my lift. What a very nice an unexpected visit that was. ‘Take an exquisite, illuminated journey through the magnificent Glasshouses of the Royal Botanic Garden Edinburgh and be part of Scotland’s first ever Chinese Spring Lantern Festival.’

All photos above were taken in the Royal Botanical Gardens, Edinburgh on 2nd February 2008.