If you have been following my diary you will know that I had a grey squirrel visit my garden and after buying a squirrel feeder I reconsidered using it. During the time I was considering this I emailed a column (Craigie) of a local Newspaper (The Courier) asking if any readers had advice or experience they could pass on to others in the same situation as myself. I asked the question: “what damage, if any, does a squirrel do by visiting a garden?” I was delighted that last week I had a response to the article. 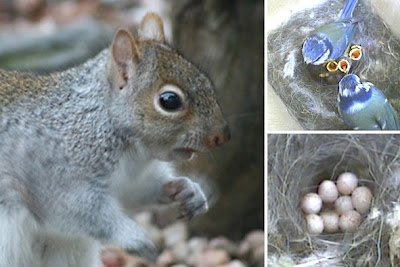 Laurie Richards of Cellardyke mailed the Newspaper with a reply:

“In answer to your correspondent who wonders if grey squirrels should be encouraged, she should be aware that their proper name is grey tree rat and, like most rats they are disease-carrying vermin.

“Whether she wishes to encourage such in her garden is up to her, but she should make sure her nest box is squirrel proof, because there’s only one thing a grey likes better than a bird’s egg, and that’s a nice helpless nestling!

“Reds, on the other hand, are vegetarians.”

This column has published a number of my emails when I have had a wildlife story to share and it is known that I have a camera Nestbox. I have to say that although I had never mentioned bird’s eggs as a concern with the squirrel before I did think I had read something about this somewhere. This reader has now confirmed this but I had no idea at all that the grey would also eat the young! I also had no idea that the reds were vegetarians! Thank-you, Laurie for your reply.

I would also like to highlight a comment I received over the weekend on my post Decision made . Thank-you Bella for leaving such a detailed account of your experience with squirrels in your garden and I am sure there are many more people who will be interested to read about it. Bella made her comment after reading the other comments on this post but as not everyone reads them I thought I would share hers here. Thank-you Bella this made very interesting reading indeed!

Bella wrote:
“I came across your site by accident today, but have been fascinated to read the different comments about squirrels. I’ve always been encouraging to wildlife in my gardens too, but never had squirrels until we moved to this present house which has a wood at the end of the road, only a few houses down from me.

“I was told they used to come through these gardens anyway but once I started feeding the birds they came even more and I was foolish enough to put up a squirrel feeder a number of years ago to keep them away from the bird food, and to keep it replenished at least once a day. As anyone who has done that will tell you, all it succeeded in doing was encouraging more squirrels – and the silly things would all insist on coming at the same time to feed from it. You can imagine it was like a massed canteen full of teenagers who could only be fed one at a time! This caused mayhem since the top squirrel who got there first would be challenged by at least numbers two and three on the social scale and led to some bad and very noisy fights (sometimes early in the morning) and the more timid ones further down the rankings would still hang around the various bird feeders and eat all their food and stop the birds from getting any – and the ones who weren’t eating at present often spent the time in my garden between feeds mating and thus trying hard to increase their numbers since they must have thought they never had it so good.

“Eventually after polite mutterings from neighbours (all except one were very nice about it, and that one just doesn’t like any wildlife or children whatsoever) and after even I became exasperated by them I stopped feeding them entirely from their own box and removed it. They had been so used to coming though that it took a while for them to get the message, but eventually the numbers trickled to the odd one or two a day. Now what I do when I see them is put out a very small amount of peanuts and sunflower seeds in a saucer just enough for him/her and that works just fine, and any time they attack the bird feeder I bring it in temporarily and the squirrel leaves in minutes when I can put it out again.

“By the way, one of the benefits of once having had so many come regularly was that I saw at close quarters the differences in the greys (since we don’t have reds in this part of Scotland) and could distinguish individuals in the population and I saw also both an albino and a black one up close. There was also one cute one who, if the feeder was empty, would come knocking on the bedroom window to waken me and let me know she wanted food – and that one still comes thankfully and still is friendly. Everyone is now happy, including me, for I like squirrels. Good luck with keeping yours, but keeping it under control.”

Bella had exactly the same idea as I had about the squirrel feeder and I did suspect that might happen too and that is the main reason I returned mine. However if I had read Laurie’s reply first I would never have bought the feeder in the first place!

So yes, my recent posting of the Squirrel on an obstacle course was entertaining but only that. I would much rather watch the activity in my Camera Nestbox and see our nestlings survive. So now, I may consider chasing the squirrel should it visit my garden again.